Populous and crowded cities of the world made progress and have developed better infrastructure, but at the cost of nothing but polluting the environment, which have created a lot of problem for us. Wastes and contaminated items of such cities are thrown out of the city near to suburb and surroundings. Burning of coal and smokes of vehicles and factories is also a major cause of air pollution. Poisonous gases have now become a part of air, they have now become part of air, and they have entered into human body through breathing. Pollution has also contaminated the lakes and rivers. Pollution in the air and water both have surged into our food chain, thus destroying our health.

Firstly, we discuss the causes and remedies of air pollution. As earlier quoted air pollution is due to waste emitted by the factories and vehicles in shape of carbon dioxide, carbon monoxide and other toxic gases and pollutants. These gases accumulated in the form of smoke and dust in the upper atmosphere, and shower down in the shape of acid rain, which not only destroy earth surface and plants but also enters into to underground water reservoir, thus contaminated the former. CFC (Choloro Floro Carbon) which is used in refrigeration process in ACs and refrigerators. CFC is considered responsible for destruction of ozone layers, which is protecting our globe from ultraviolet radiations of sun. Exposure of these radiations is causing skin cancer and increasing the earth temperature. The increment of temperature is cause global warming.

In 1982 scientist discovered a big hole in the OZONE layer at the upper atmosphere at Antarctic. Direct ultraviolet rays at this region are melting ice of Antarctic belt. Melting of ice will not only increase the height of sea level but also it will increase the existing average temperature of the earth. Both diverse climate changes will disappear the countries like Maldives, Some parts of Bangladesh, Sri Lanka, and Greenland. Melting of Glaciers in the south Asian region already has changed the climate. (An Essay on Ozone layer Essay | Ozone depletion causes and effects is also posted on our web.) Pakistan is the country, who is top of the list, which is being affected by these changes. Unusual rain and flooding have hit the baseline of the economy. Basin of the country major river Indus is at the Himalayan region, at the first instant melting of ice will increase flooding and second phase will snatch the basin. Acute shortage of water will struck the power sector down and hampers the economy. Resultantly, Indus valley civilization once again will be ruined.

Green peace, UN agencies are striving hard to save the population of the earth and next generation from it adversities. USA, Japan, Russia, Germany, Italy, and India are the major countries, which are polluting the air by emission of CO2 , N2, CFC and other toxic gases. The above-mentioned two bodies are compelling developed countries to reduce their share of emission of harmful gases in the air and make alternate arrangement. According to WHO (World Health Organization.) 80% diseases of skin and lungs are due to air pollution. Advent of technology and industrialization have gifted humanity uncountable facilities along-with many type of pollution, out of which noise pollution is one. Noise pollution is resulted from the sound and voices of unbearable range of traffic, airplanes, and industrial machinery. As the sound of 90dB is accepted standard of bearable sound. All upper limits are termed as Noise Pollution. Continuous exposure to such noise will cause not only hearing loss but it will create hyper tension, fatigue, sleeplessness and asthma. Noise pollution can be avoided by shifting the factories out of the populated area. And shifting the colonies from heart of city and bifurcating commercial and residential area.

Water pollution another most dangerous form of pollution which not only causing disease among human but also vanished marine life in the water. Waste and chemicals from industries, drainage and sewage water are major sources of this evil.

Diseases due to Pollution Most polluted cities of the world 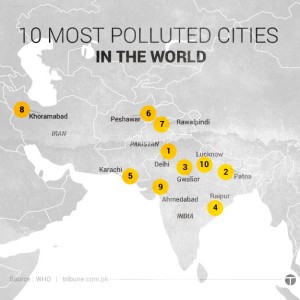