Essay on Terrorism in English | What are terrorist groups ?

Aims of terrorism are usually negative. Terrorists damage life and property on a large scale. They create restlessness among the masses, and incite the feelings of people against the Government. One Government can also use this organized activity against other Government. Some international terrorist organizations train terrorists for the achievement of their objectives.

But in some countries national liberation organizations are forced to get support from terrorism for recovering their lost territories or to get rid of the cruelty of the foreign rulers.

The dictionary meaning of Terrorism is, “such a violent and threatening practices used to overawe or coerce, especially for political, religious, or individual purposes”. It may be referred as systematic use of violence by some organizations, group of people, religious sects, and minority in any region or masses to achieve their goal and desires. Some time there may be no clear goal or aim for terrorist activity; it varies from region, religion, and organization accordingly. It has many variations it may be tactic, in shape of holy war, or freedom struggle of minorities against majorities. However latter is honored at present mostly in the world.  The word “Terrorism” originates from two words “terrorisme” and “Terroe”, the former is French and latter is Latin origin. Both the word has a meaning of fear and frighten. 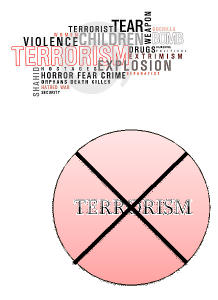 In short, every Nation has different meaning and definition of terrorism due to difference in their region, religion and thoughts and social set up. Most of the countries have made their own definitions and, listings of activities of which may be terrorist activities, for their legislation and constitutional issues. However, United Nations is working to draft a comprehensive definition of terrorism since 2000, and in 2002 convention on terrorism has discussed the following:-

(ii)       Serious damage to public or private property, including a place of public use, a State     or government facility, a public transportation system, an infrastructure facility or the   environment; or

(iii)      Damage to property, places, facilities, or systems referred to in paragraph 1 (ii) of this   article, resulting or likely to result in major economic loss, when the purpose of the conduct, by its nature or context, is to intimidate a population, or to compel a Government or an international organization to do or abstain from doing any act.

Organization of Islamic Conference (OIC) in its twenty sixth sessions at  Ouagadougou, Burkina Faso, in July 1999, have described the terrorism as under:–

A person is said to commit a terrorist act if he,

(a) in order to, or if the effect of his actions will be to, strike terror or create a sense of fear and insecurity in the people, or any section of the people, does any act or thing by using bombs, dynamite or other explosive or inflammable substances, or such fire-arms or other lethal weapons as may be notified, or poisons or noxious gases or chemicals, in such a manner as to cause, or be likely to cause, the death of, or injury to, any person or persons, or damage to, or destruction of, property on a large scale, or a widespread disruption of supplies of services essential to the life of the community, or threatens with the use of force public servants in order to prevent them from discharging their lawful duties; or

(b) commits a scheduled offence, the effect of which will be, or be likely to be, to strike terror, or create a sense of fear and insecurity in the people, or any section of the people, or to adversely affect harmony among different sections of the people; or

(c) commits an act of gang rape, child molestation, or robbery coupled with rape as specified in the Schedule to this Act; or

(d) commits an act of civil commotion as specified in section &A.

If a majority believer(s) of one religion do not accept and honour minority religion of another community, and attacks their religious places and kills the followers of the latter, then it will be termed as Religious terrorism. This from of terrorism is also in play in most parts of ASIA. Sectarian violence is committed by one sect to another sect of the same religion. State terrorism is handled and done the Government and States by itself with their people and subject, to enforce their own supremacy and thoughts, contrary to the fact that people and subject are not willing to accept these changing.  Besides this most of the Groups, Organizations and Religious extremist use act of fear and kill people to get their goals and desires. This may be included in the list of Political terrorism.

Theft of data and cyber-attacks on Government and States ICT tools, webs and applications is termed as cyber terrorism. Cybercrimes are sometimes referred as terrorist activities when it harms interest a large population or State.

Terrorism may be done by the “States Sponsor Bodies”, “Non-State Sponsor Bodies”, “Religious,” and “Extremist Organizations”.  Terrorism is not a direct war it is done indirectly. It is also limited to a small area but area may be large. There may be chain of people and groups to support single act of terrorism. From funding to planning, it may involve such instruments, which are not visible to all and sundry. Acts of terrorism may be motivation, physiological, political violence, targeted killings, bombing, theft, kidnapping, promotion of fear, use of lethal weapons etc.

How to stop the terrorism

To stop terrorist activities World Nations are making efforts and collaborating with one and other to curb this evil. Anti terrorism, squads and forces are being recruited in the countries, which are badly affected by the terrorism. Modern technology and warfare are also being used against terrorist organizations. World is making joint effort to eliminate it. One of the most recent examples is Pakistan Forces war against TTP (Tehreek-e-Taliban Pakistan). Operation Zarb-e-Azb conducted by the Pakistani forces is admired all over the world. The security forces launched this operation after hundreds of act of violence by the TTP. Major attacks were Army School Killings of children, attacks on Kamra and Mehran Air bases.