Here are some of very useful and handy tips for English Punctuation Rules:

Variations in tone and short and long pauses in speech are indicated by different marks of punctuation in writing.  The aim of all these signs is to make the sense clear and to record, truthfully the tones of the speakers.

In most cases, the practice of good writers differs from one another.  Whereas some writers would not use any signs other than the obvious ones (period, comma, exclamation and Interrogation) and those, too, scantily, there are others who are notorious for the excessive and burdensome use of almost every sign.  Writers like Carlyle have used even capital letters and hyphens unnecessarily and excessively.

A general rule for the students is to use the punctuation marks sparingly, and to avoid the use of commas where the sense is clear and comprehensible. 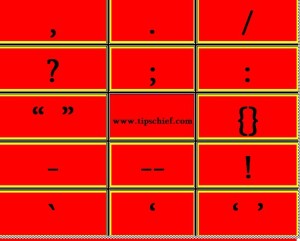 THE CHIEF MARKS OF PUNCTUATION ARE: